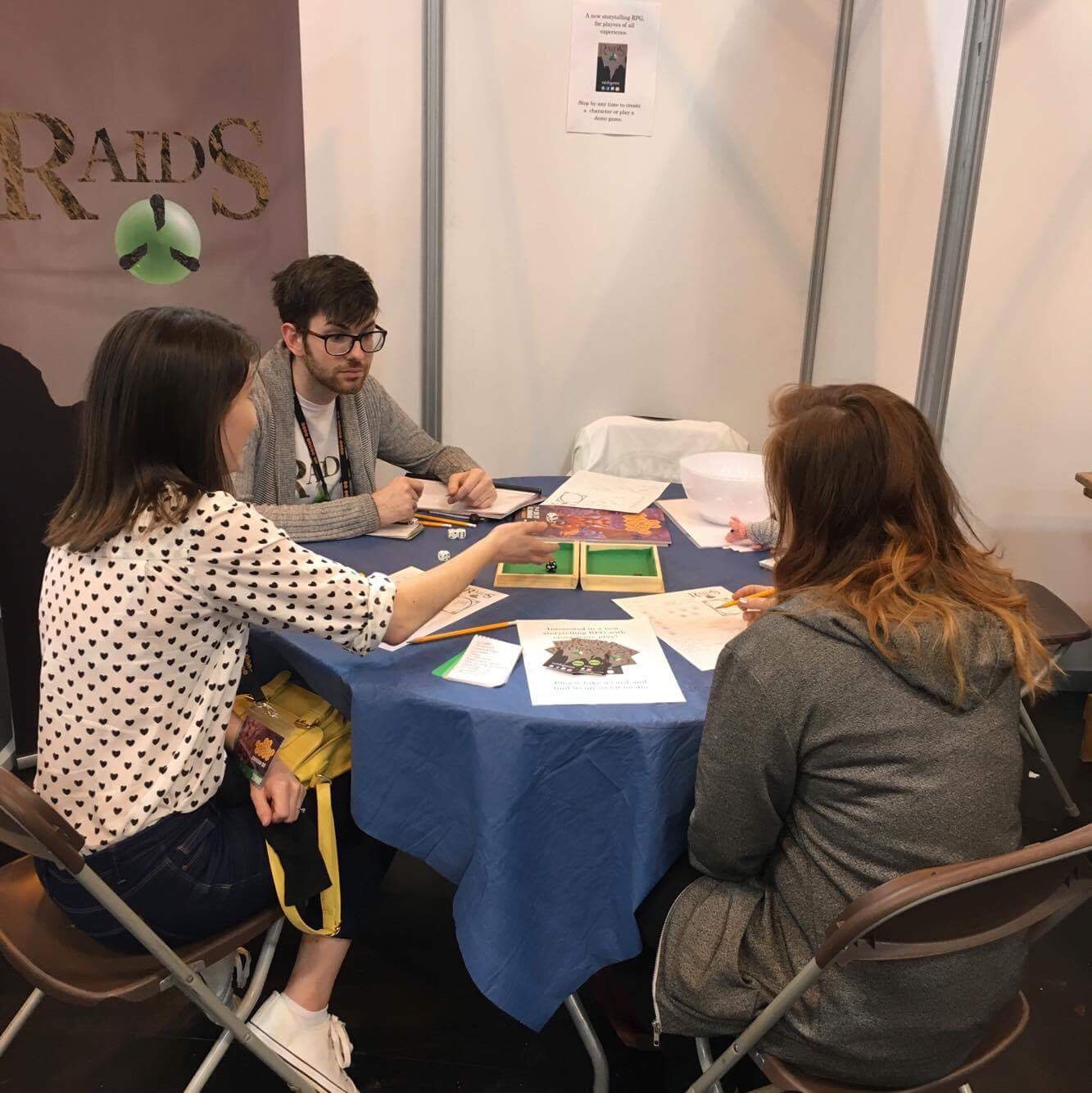 Raids is now live on Kickstarter! You can find the campaign here: Raids Kickstarter

So for those of you who would like to know more about the game and didn’t get a chance to visit us this year at UK Games Expo, here’s a bit more information about how Raids works.

When playing Raids you will create a character to explore the campaign world of Novathe, or any world of your choosing. The character creation is simple to help get you straight into the action and so that new players are able to feel comfortable.
Creating a character

Firstly, pick a concept for the character. What sort of person do you want to play as? You can either pick an archetype, or let your imagination run wild. What drives this person? What are there goals? What is their profession?
Next you pick a race. There are 3 main humanoid races to choose from, but there are notes in the creature section of the rules if you wish to play as a non humanoid (a unicorn, a dragon… anything!) Your race will grant you some features to aid you as you perform ability checks through the game, and there will be information about their cultures and how to fully get into that role.
Next you pick 5 skills that you are trained in. There isn’t a specific list of these to choose from, and not picking one doesn’t mean you can’t perform that skill check. For example, if you are not trained in heavy armour, you can still wear it but you won’t get the full mobility benefits of it. The only real rules behind what skills you should pick are these: one of them should be your craft/ hobby/ profession to add some flavour, one should be a combat skill (unless you wish to play as a pacifist, but you’ll need to think carefully about why they could end up in fights) and magic is only accessible to those who are trained. Each of these skills will level up as you use them to aid your party and progress the story- you yourself will not level up. This way you can always train new skills as you adventure.
Next up you’ll roll for your ability scores:

As you adventure, you will need to make skill checks to see if you are successful in completing tasks. You will roll a d20 and add the relevant attribute score to your roll, and any bonuses from trained skills that you have. These rolls may either be opposed checks, or to achieve a target set by the adventure/ Raid Boss. If you are playing without a Raid Boss, one of your fellow players can roll the opposed check for you.
Combat 101

Combat follows a similar style as the skill checks. You roll to attack an opponent, and they will make an opposed roll to actively dodge you or block. You will also be able to dodge and block yourself, and as you survive more battles, you will increase your skill to do so.
Magic 101

Magic can be played out one of two ways. For younger players, and people who want to focus more on the stories, there is an attack spell they roll like a normal attack, and for utility abilities (such as light, or flight) they can describe their chosen action and roll to see if they are successful.
For the more mechanics minded players, there is a list of spells to choose from and by casting more spells successfully you unlock a deeper learning of magic and more powerful spells. This also opens the magical mishaps, which occur on the roll of a natural 1. Your spell may explode, or drain you of your connection to magic altogether. This is the more balanced way of playing the game and is the suggested way for fairness, but we don’t want to take away the fun from people exploring RPGs for the first time.
Tools

Listed at the back of the book are conversion notes for you to take anything you like from other games or worlds, and convert them into the Raids system. This way you can truly customise your game and tell the stories that you want to.
Further adventures

With the rules, you will get the Starter campaign, and a Kickstarter exclusive adventure. You can use these, or create your own. We will be releasing more adventures in the world of Novathe after the full launch of the game, which will be available to download in a pay what you want format. But we will also be upgrading the website so that other players may share their adventures with the community.